Consider this your supersonic flight plan as you discover how my team broke the old records and continued to break the new ones. You're going to find out how to become the lead pilot for your team and a barrier-breaking leader.
Posted by Danny Cox at 10:38 AM 1 comment: 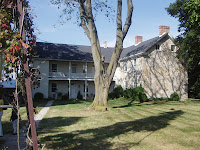 Last week was an exciting week in two ways. First, I received the “Legend of the Speaking Profession” designation in Hagerstown, MD from the Veteran Speakers Retreat What an honor! Many friends were there, including Jim Cathcart, who also received the same honor.

The second great thing was locating and visiting my colonial ancestors home near Hagerstown. The current owners were very hospitable in showing us the Shelby homestead now sitting on 500 acres. Above is a photo of this historical site. It was formerly 5,000 acres. Several of the Shelbys were born there in that home. Five of my relatives were Officers in George Washington’s Army.

We sat in the living room (parlor) of the stone portion of the house built in 1750. What conversations must have been carried on in that room as the Revolutionary War approached!

The other half of the house is the NEW part built in 1800. By the way, the home is immaculate and is kept like a museum by the owners.

Tedi, my archaeologist, was thrilled with the silver coins that have been dug up, as well as tools and furniture pieces from the mid 1700’s.
Posted by Danny Cox at 10:56 AM No comments: