Restlessness and discontent are the first necessities of progress.”

What drives no limits people? That’s what I wanted Jim Newton, author of Uncommon Friends to reveal. He didn’t disappoint me.

I met him thirty years ago when he was in his late seventies. During his early twenties his circle of friends was Thomas Edison, Henry Ford, Harvey Firestone, Nobel Prize Winner Dr. Alexis Carrel and Charles Lindberg.

This group has been called the men who invented the 20th Century. During the hundreds of hours he was with them, he took notes, actually five or six boxes full of them. This treasure trove became the basis for Jim’s book, “Uncommon Friends.”

Of my many conversations with Jim one is a standout. I learned one of the biggest lessons in my life. I said, “Did these great high achievers have any common driving forces?”

Three interlocking and self-supporting forces, he explained, motivate these high achievers. First of all, no-limits people are inspired by an unshakable sense of purpose. This sense of purpose supports and reinforces (and is supported and reinforced by in turn) two more driving forces. The no-limits person has an unquenchable spirit of adventure and a desire for continued personal growth. These people know they don’t know it all. (Anyone who does think he or she knows it all is in what we used to call “the graveyard spiral” in the flying business.)

As I say, these three motivations don’t operate in a vacuum. Although 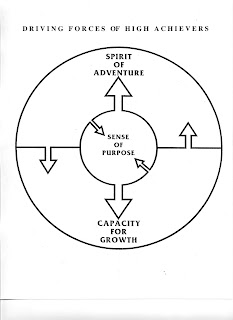 the sense of purpose (which is sometimes described as a “sense of mission”) initiates the cycle, it connects with each of the other two motivations, and is constantly strengthened by them. Take a look at the diagram, which I developed after a discussion with Jim. It makes the process a little easier to understand.

The cycle starts in the middle—the no-limits person has developed an incredibly strong sense of “what needs to happen and why.” This is the awareness and planning stage, the part of the cycle where goals are developed. Without a firm sense of purpose, without a mission, without a strong goal orientation, there is no such thing as a barrier-breaker.

So the goal’s established and a plan is in place. Then the no-limits person launches that plan and embarks on the adventure of actually achieving the goal. Of course, there are challenges and temporary setbacks along the way; problem solving is part of the adventure. This is the second phase of the process, and it’s very exciting.

Even after the goal is achieved, the no-limits person is motivated—this time, to prepare for the challenges of the future. That third element, the desire for continued personal growth, is a commitment not to “rest on laurels” or “stick with the formula” because it’s always worked before. No-limits people are about positive change, positive growth, and forward movement. For them, the cycle is not complete until there’s evidence of renewal and new understanding.

All three motivations support and reinforce one another. All three are essential forces for the development of a no-limits life.

These are the driving forces that no-limits people use to put their lives into “afterburner” mode, to use Air Force terminology. With practice, you can use these forces to change your life, too!

Immediate Action: Review the three forces that drive no-limits achievers. Jot them down on a separate sheet of paper.

Point to Ponder Before You Go On: No-limits people are those who commit to pushing themselves outside of the comfort zone, those who know what they want and are willing to commit fully to the adventure of achieving their goals, and those who are willing to say, as my friend Jim Rohn says, “In order to do more, I’ve got to be more